Earlier this week I was at a small but excellent conference on adaptation to climate change, hosted at PERC in Bozeman (Michael Greenstone's keynote is covered here).  Lots of interesting results and ideas came up, but this was one of the most exciting outcomes for me.
Matt Neidell was presenting his working paper (joint with Josh Graff Zivin) on "Temperature and the Allocation of Time: Implications for Climate Change" when he put up this graph. It shows the number of minutes in a day that individuals (who work in outdoor or temperature-exposed sectors in the USA) spent working as a function of maximum temperature (in Fahrenheit) that day.  The interesting part of the graph is that on hot days, people work for less time. 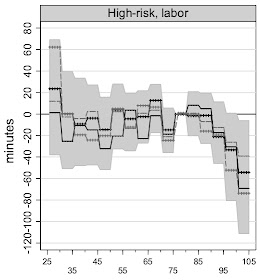 Wolfram Schlenker then commented something like, "60 minutes out of an 8-hr work day? That's a huge effect!" And I thought "hmmm... 12.5% sounds familiar..." and then pulled up this graph from my own work on my computer.  The panel shows total output for similar sectors (in 28 countries, not including the USA) as a function of average daily temperature (in Celsius).  The graph shows that national output in several [non-agricultural] industries seemed to decline with temperature in a nonlinear way, declining more rapidly at very high daily temperatures. 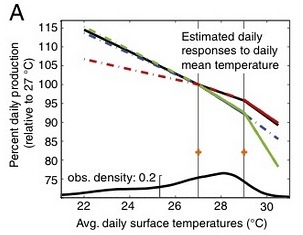 It's worth noting that reductions in worker output have never been included in economic models of future warming (see here and here) despite the fact that experiments fifty years ago showed that temperature has a strong impact on worker output (see here and here).  In my dissertation I did some back-of-the-envelope estimates using the above numbers and found that productivity impacts alone might reduce per capita output by ~9% in 2080-2099 (in the absence of strong adaptation).  This cost excedes the combined cost of all other projected economic losses combined (eg. see here and here).
sol at 09:00
Share